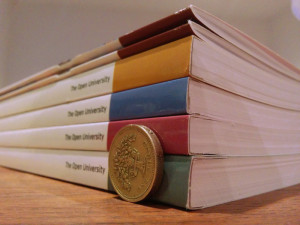 This is the amount of reading and exercises that I would normally have to work through over a nine-month period. Entirely doable.

However, as I've mentioned in previous posts, this module is merely to make up the credits for my first stage. Bad news is: it's all quite basic. As a result, I'll also be working through a nice fat book on analysis, to ease me in to my second stage that starts next year. As such, my nine-month work load actually looks a little more like this: 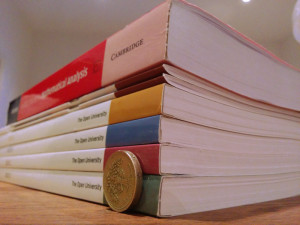 So we'll see how far I get with all that!

Flicking through the first couple of pages of these new materials, I realise that they cover some very basic areas of mathematics indeed. Perhaps even a little more basic than I was expecting. I think I'll have to keep reminding myself that this was my plan from the beginning, and just concentrate on submitting my assignments on time. This work will definitely be taking a back seat...

More importantly, over the past couple of weeks I've also been working through the book on analysis, and although I'm only a few pages in, it's proving to be really valuable; for one, I'm becoming a lot more comfortable with proofs and solution sets of inequalities.

Lara Alcock wrote in her book "How to Study for a Mathematics Degree" a warning to all mathematics students to be prepared to adjust their intuition.

Very quickly after starting with "A First Course in Mathematical Analysis" by David Brannan (see my earlier post), I have come across something that very much breaks my intuition. It turns out that

The equals sign tends to show that the object on one side is identical to the object on the other. In this case, they look like two completely different objects! We all know what "

Of course, based on Lara Alcock's advice, my first thought was "how on earth do I adjust my intuition to make this feel completely logical?!"

After some thinking, the following helped me a little bit: Before, I considered

to be a number that was infinitely close to

"s after the decimal point. I now, however, consider

to be an infinitely accurate representation of

My opinion of this may change, but this is what's helping me make sense of this for the moment....